A Turning Point in the 2030 Commitment

Ten years ago, SHP signed on to the American Institute of Architects (AIA) 2030 Commitment to work toward achieving zero carbon emissions in our projects by the year 2030.  Now that we’re halfway to the deadline, where does SHP stand in our commitment? And, more importantly, what’s next?

A Decade’s Worth of Data

The 2030 Commitment includes target energy reduction rates based on baselines established from energy use data for buildings of a similar use type, collected by the U.S. Energy Administration’s Commercial Building Energy Consumption Survey (CBECS) in 2003. These target energy use reductions get progressively more stringent every five years; for example, in 2019, the target was to reduce energy consumption by 70% compared to 2003 levels. This year, it jumps to 80%. Progress is tracked annually via self-reporting by each of the signatory firms, which submit their average energy reduction rates directly to the AIA.

SHP is able to calculate the projected energy use reduction of each of the buildings we design by performing an energy simulation. Our models are based on each building’s design parameters for heating, cooling, lighting, building envelope construction and more. We then compare the expected energy use, to the amount of energy actually used, and finally to the baseline described above.

I’ve been tracking SHP’s progress toward the 2030 Commitment since 2009. Including the data I just collected and analyzed for 2019, I now have a decade’s worth of facts and figures to report. 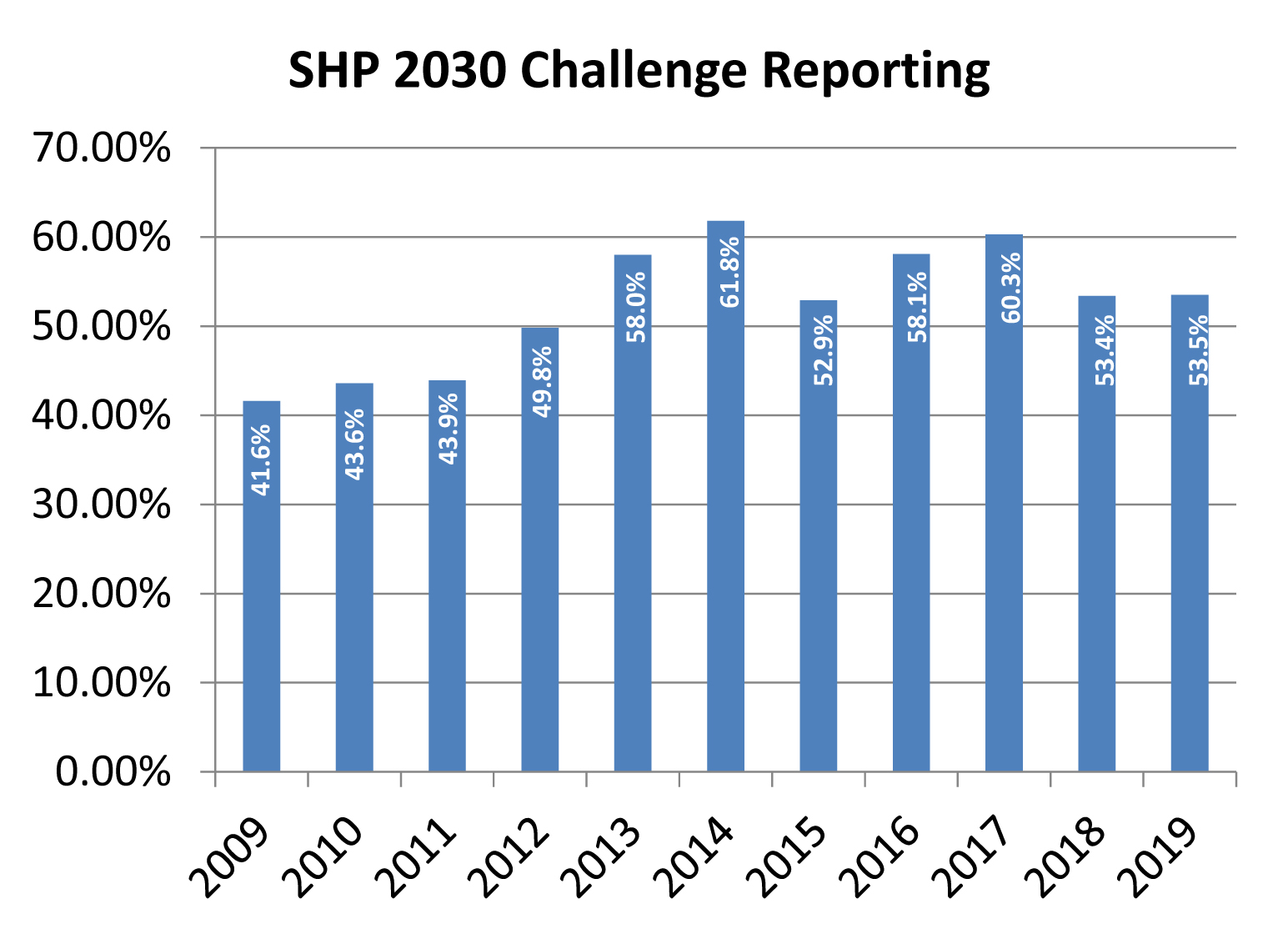 While the composite report of all reporting firms’ data for 2019 has not yet been issued, I feel safe assuming SHP will again trend higher than average among firms across the country that are especially committed to reducing energy use and carbon emissions. That’s great! But we’re still not currently hitting the targets of the 2030 Commitment.

But it has become clear over the past five years that the maximum energy use reduction we can achieve using good design alone is around 53%. We can bump this reduction up to the high 60s or even 70% by installing geothermal heating and cooling systems, which you can see in the data between 2013 and 2017, when about half our projects were utilizing this technology.

In 2018, however, our energy reduction rates dipped by about 7%. What happened?

To understand, let me offer a bit of insight into SHP’s process. When we talk to our clients about choosing the correct HVAC systems for their project, we present lifecycle cost analysis so that building owners can see not only how much each system will cost on install, but also how much it will cost to operate and maintain over its entire life.

Before 2017, the lifecycle analysis on geothermal HVAC systems—which are more expensive upfront—showed a payback period of around eight years or less, once energy use and costs were calculated. But in 2017, we saw significant drops in energy prices, especially natural gas. As geothermal systems started showing longer and longer payback periods, they became much less attractive systems for fiscally minded clients. Low energy prices will always make being less energy efficient more attractive, a common hurdle we are facing today.

Four Factors for the Future

So, where do we go from here? How do we all get back on track with our 2030 Commitment target? It will really take a combination of four factors:

Unfortunately, as you can see from the four factors above, architects and engineers cannot achieve the AIA 2030 Commitment through good design alone. We also can’t simply throw up our hands and say it’s too hard and we can’t fix it.

Large groups of citizens and governments—when aware of a problem and concerned with fixing it—can change the course of the issue.

As a design community, we have a responsibility to advocate for environmental awareness and energy efficiency to our clients and local, regional and national governments. We can work with code councils and building officials to make regulations more stringent. Innovative architects are also working hand in hand with industrial designers and product manufacturers to create the technology needed at a price that is attractive.

The COVID-19 pandemic has shown us that large groups of citizens and governments—when aware of a problem and concerned with fixing it—can make a huge impact and change the course of the issue. Nearly all scientists agree that climate change is a looming, accelerating issue that will soon become undeniable. Will we rally together in time to prevent devastation?

For weeks now the Obama campaign has been running an ad about 1M auto industry jobs saved.  It’s an effective […]

I’ve been told I can be kind of a font snob. I’ll admit it. I am. I have a copy of the movie Helvetica at home. Yes, it’s a movie about a font.  And no, I don’t think that’s weird.  Well, maybe not too weird…

Read More The Secret To Great Partnerships Is Really No Secret

Recently, I was asked to speak at AIA Minnesota’s Innovative Practice Forum on the topic of Owner’s Advocates and Partnerships.  When I was preparing my talk, I wanted the audience to have a light bulb moment about how to create lasting and meaningful partnerships with clients.  In truth, it’s not that complicated.